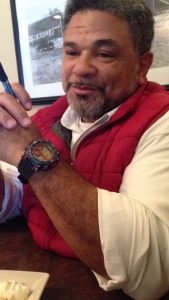 John Gallien was born in Lafayette, Louisiana. He is the eldest of five children to Mr. & Mrs. Sterling Simon Gallien, Sr.

A graduate of Lawtell High School in 1980, John enlisted into the U.S. Marine Corp, where he was awarded many citations. These included Meritorious Letters of Commendation, Navy Achievement Badges of Distinction and advanced Meritorious Promotions during his tours of duty. Additionally John continued his education at Eastern New Mexico University, where he received an Aviation Science and Technology degree.

John is also a true believer in our Lord and Savior, Jesus Christ. Now, although John has been a worker in the church almost all of his life, it was in 1993 that, just like Saul (Paul), John saw the marvelous light, made his confession of faith and was baptized at Mt. Pleasant Missionary Church in Greenville, S.C. and began his work trying to adhere to the Great Commission.

John often inflects his voice and references the Lord and or prayer on several occasions when he teaches the school’s Aviation Training Curriculum, and by doing so, many students ask him if he is a preacher. Even in his own church, many of the congregation states that when John teaches Sunday School or is asked to speak on issues, they often say, “he is a preacher in the making”. John’s other jobs in his church, both past and present includes, Trustee Board Chairman, Sunday School Chairman and Master-at-Arms.

John’s favorite pastime is volunteering and working to mentor the young people in and around our communities. Especially, with those children who are lacking in terms of spiritual, moral, ethical, scholastic and athletic training. Now in regards to sports skills training, John has been a coach and personal trainer in basketball, football and strength training for many years and have seen the fruits of his labor payoff in which just about every team that he has helped coach, that team has either made a deep run into the playoffs or have won the championship in all of the respective and associated sports.

John Gallien’s favorite admitted accomplishment that he states quite often, is that he was never so satisfied with anything he had ever done in coaching, until his basketball and football team did not want to go on the court and or field until they were covered by a prayer !