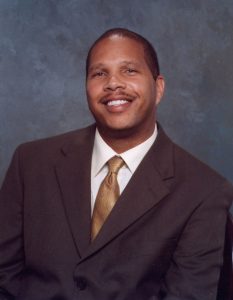 James ‘Jay Tee’ Tucker was born in Paris, Kentucky. He is the youngest of four boys to Mrs. Sonja Tucker and the late James R. Tucker.

A graduate of Paris High School in 1980, Jay Tee continued his education at Morehead State University in Morehead, Kentucky, where he received a Bachelor’s of Business Administration degree in 1984.

Since graduation from college, Brother Jay Tee Tucker‘s work experience has afforded him the opportunity to travel to many foreign lands. His professional work experience has included companies such as Ashland Oil Company Incorporated, Toyota Motor Manufacturing and he is currently employed by BMW Manufacturing Corporation where he is the Manager of the Physical Logistics Department.

Jay Tee has served as past vice president of the Upstate Council of Logistic Management, which focuses on education as well as networking with upstate businesses in the areas of logistical solution within the supply chain.  He has shared his professional experiences on such topics as improving the supply chain and leadership with several universities, including Clemson.

Known as a man of integrity and honesty, Jay Tee has participated as judge and auditor in several preliminary pageants to the Miss South Carolina and Miss America pageant.

No worldly accomplishment can compare to the day when Jesus called him out of darkness into His marvelous light. Brother Tucker confessed his belief in Jesus Christ as Lord and Savior in 1972 and was baptized by the late Rev. Raymond Smith Sr. at Seventh Street Christian Church, Disciples of Christ in Paris, Kentucky.

Although baptized at the age of 10, it wasn’t until 1991, at the age of 28, that he received his sight from the Lord. Since then he has been a worker in God’s harvest, spreading and teaching the gospel.

He has been described as a warrior for Christ. A challenger. Like a coach who always pushes his players to be the best, Brother Tucker always challenges people to think outside the box. He challenges you to search within and continue to grow.  He is not shy to speak out and up for Christ whether he is on his job or any place.  He taught adult and youth bible studies at St Mark and St. Matthew United Methodist Churches, Taylor South Carolina, for over 9 years and he continues to share his gift with other by conducting workshops focused on spiritual growth.

He is presently writing a book titled “Something to Think About”, soon to be completed, which is purposed to challenge people to look deeply within and to remove the mask that others see in order to reveal the real person.

His favorite pastimes are working with youth and visiting the elderly as well as sharing God’s word with others. His passion to see teach extends also to the basketball court. He has volunteered his time and energy to coach youth in the Mauldin Recreation Leagues for over 15 years, where he has help youth develop their talents and skills as part of a team. He and his wife Valerie, a God fearing woman, has two children, Jameson and Jonathan reside in Maudlin South Carolina.